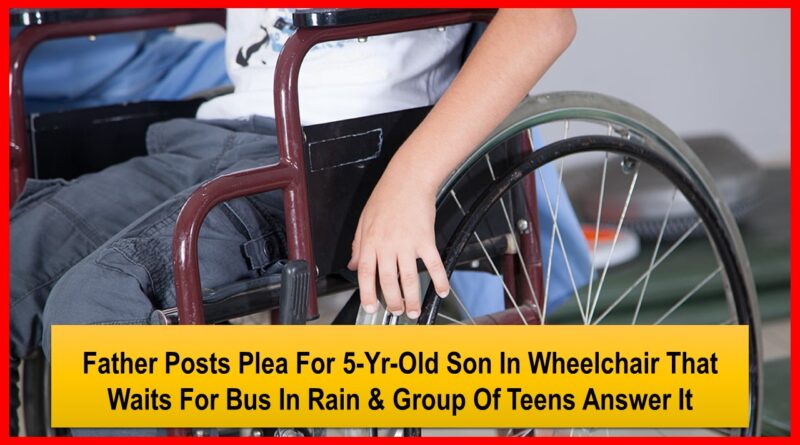 Parenthood is not an easy thing. Along with its perks, it has a lot of challenges that a parent must overcome especially if a child is handicapped. The worst feeling for a parent is to not be able to fulfill all the desires of their children. This story is also about a father and his struggles with his wheelchair-bound child.

Ryder’s father Tim Killam in Rhode Island struggles to protect his handicapped child from the severe cold as his son waits for the school bus. Most of his ideas such as using a deck umbrella have gone in vain against the cold.

After failing, Tim Killam asks the same question online especially from his relatives if they had any better umbrella to protect his son with and the answers are more promising.

The online post of the helpless father from the people around was seen by Mr.Dan Mckena who is a construction Technology teacher at Westerly High School and he has promised to come up with a solution before the arrival of the winter. Three classes of the same school came to build a small cabin for the wheelchair-bound kid that could withhold both the winds and the cold.

Some wood was granted by the local Home Depot whereas the rest of the cost was paid by the Killam’s family. Now a new heavenly bus stop stands with the signboard ‘Ryder’s Bus Stop’. This all brought an optimistic attitude among the dwellers of Rhodes Island. 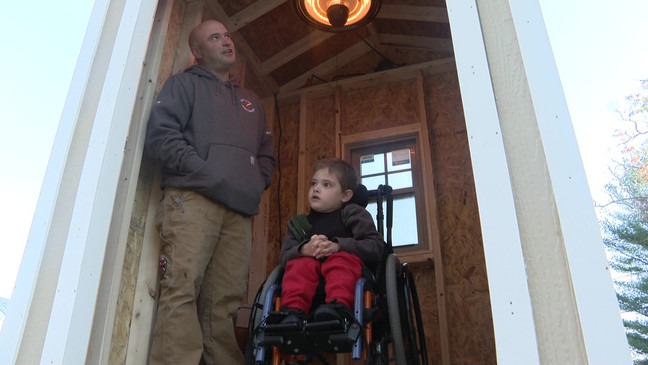 THE STRUGGLES OF LITTLE RYDER:

Unlike other kids, Ryder cannot walk or run towards the bus especially when it is snowing or raining. The extra time is trouble for little Ryder as he lives 75 feet away from the bus stop.

Watching his son go through such inconveniences, Tim Killam had tried to use their patio umbrella to keep Ryder’s from the cold but it was just a useless endeavor. After that Tim turned toward the social media and asked help to lend them a strong umbrella if someone was not using it.

This post reached the construction technology class at Westerly High School, where its respected teacher McKenna responded to Killam’s family through email that they wanted to help. 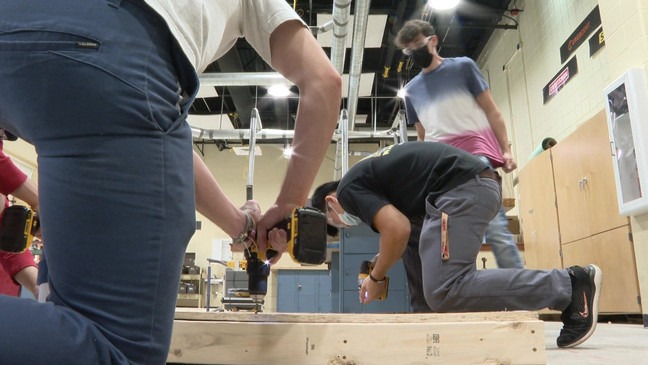 Their students had already done such projects before but McKenna wanted to instill the goodwill in their pupils towards their society even further as he believed that it would lead to an active social interest in their students. Furthermore, Dan McKenna added that the activity was enjoyed by all the students. It was a physical form of their hard labor from which the students learned teamwork’s significance and group bonding. The enthusiasm of the students enhanced their sense of responsibility towards their society.

The Killam family’s interview by the local news outlet was also full of positivity as the little Ryder was really happy and hopeful about his caring community and the family was moved by such holistic endeavors of the society.

A construction class at Westerly HS learned a 5-yr old was in need of a sheltered area to wait to his bus in the morning. Ryder,can’t run outside like most kids and had to wait in the rain but not anymore thanks to the kindness of students who built him a bus stop! @ 5:30 @NBC10 pic.twitter.com/cl4a3xKXJ7

Tim also added that now Ryder likes spending time outside even if it is snowing as he has his little fort to protect him. They all thanked their community for such efforts and were very positive about the strength of the bond of their society.

Ryder’s Fort which is at the side of Killam’s house has saved little Ryder’s from the troubles of the winter. As he waits in his Forte he is filled with immense gratitude for his community.