Her grandson set the record straight recently after people flew into outrage over the photo that had been shared on a Facebook group. But nevertheless, why wasn’t she offered a seat? 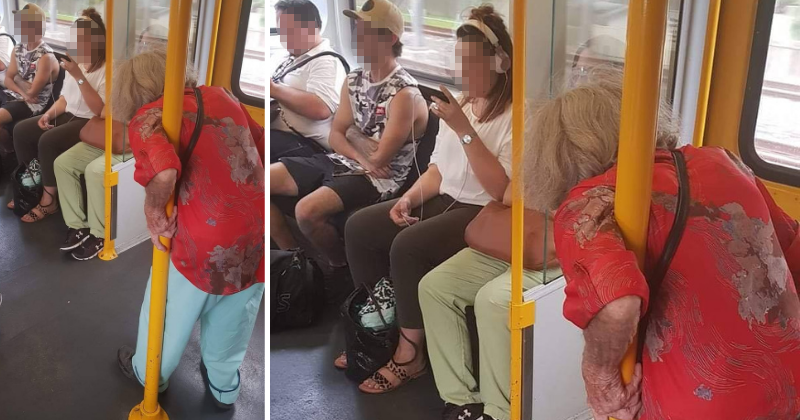 That everything we see on social media is not real, is a fact we have all come to accept in the last few years. Some people actively create fake news to spread hatred while some fall victim to misunderstanding a situation. Something similar happened recently after a photo from Sydney was shared. The photo was of an old lady standing on a Sydney train while young people sat on with earphones plugged in and seemingly ignored the frail woman. She was seen hunched over holding on to the pole in the train while people around her were sitting comfortably.

The internet restored faith in humanity by coming to her aid and showing outrage over the incident. People denounced the young people for not helping the woman. The photo was shared on the Facebook group Aussie Aussie Aussie Aussie with the caption “No respect”. However, it has since been taken down. It was shared more than 22,000 times and received thousands of comments, reported Daily Mail.

“Heartless souls. Some say they are called the Millennial generation,” said one user on Reddit, where the photo re-emerged, while another said, “They need slapping, the lot of em, obviously they have no respect or manners!” Many of the people said they would have definitely offered the seat to the elderly woman. One of them said, “I would have offered my seat as soon as she jumped on the train, I’ve done it before for an old lady.”

A photo of an elderly woman clinging to a railing on a packed Sydney train has divided the internet: ‘No respect’. https://bit.ly/2WUOx7E 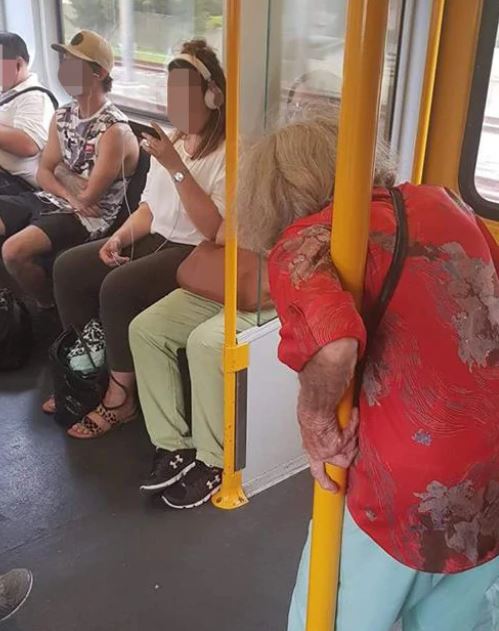 Saw the original. All young and apparently healthy. Well physically able to play with their phones anyway. Disgraceful.

Everyone jumped to the wrong conclusion after seeing the photo.

I see this everyday on trains in Sydney, it’s disgusting. I’m the first person to offer my seat to any elderly person, pregnant woman, a person with a pram, anyone who’s disabled or anyone with luggage no matter how long my day has been or how tired I am.

However, not everyone was convinced that everyone got the story right. Many raised doubts about what might have happened that day. Some said that people must have offered but she could have refused. Another person said, “It might be too hard for her to sit and stand back up. I’d like to think the kid with the hat offered. The other 3 are worthless.”

People were also outraged by the person who took the photo. “Typical person today. Take a photo and complain on Facebook but don’t have the balls to say something in real life,” one person said.

Meanwhile, Sydney Trains told Daily Mail, “Sydney Trains encourages all of its passengers to observe appropriate transport etiquette including respecting elderly, disabled or pregnant customers by offering up their seats.”

And finally, the woman’s grandson set the record straight.

He wrote to Ben Fordham’s 2GB radio show, according to News.au.com to explain what happened. “The mature age lady was preparing to disembark at the next station — she’s my nanna,” the man wrote. He said that people were too quick to judge and she was about to get down at the next stop, which is why she was standing.

Sydney Trains CEO Howard Collins said pictures “can be deceiving”. “This is an opportunity … to remind people that while we’re in our world of texts and headphones, we should just be looking up and checking, is there’s someone who could do with your seat?” Collins said.