Animal lovers the world over have been left incensed after pictures surfaced depicting a dog dangling from a window by an extremely short chain.

The pictures reportedly come from Teloloapan, Mexico, and show what appears to be an act of torture as cruel as it is obviously painful to the dog.

The alleged “owners” of the animal reside in the Emiliano Zapata neighborhood of Teloloapan, Mexico, and are said to have left the dog in the scorching sun the entire day. The chain is so short that the poor pooch was forced to stand on his hind legs to avoid suffocation.

It wasn’t long before concerned by-passers attempted to intervene. One stranger even approached the dog’s owners and begged them to surrender the animal, but they merely chased the man away.

Fortunately, said stranger was able to snap a series of pictures before leaving the scene, pictures which have since been uploaded to social media.

@cesarmillan http://www.pawbuzz.com/chain-back-legs/ …
Cesar, can you call the police? It would carry a lot of weight if they heard from you. Thank you!

Dog On Short Chain Made To Stand On Back Legs All Day, Cries In The Heat Every Day

Owners claim the dog is “doing fine” and ask worried strangers to mind their own business. Spread the word to help this poor dog. 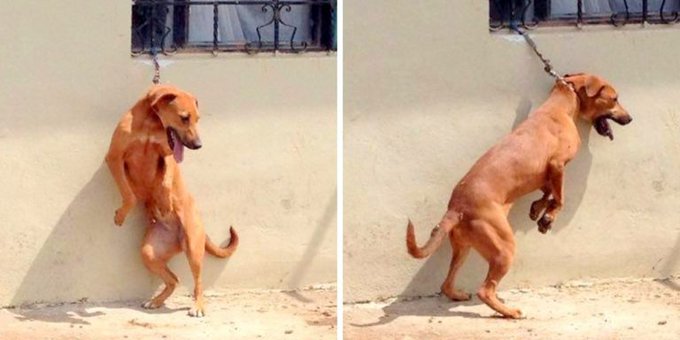 Dog On Short Chain Made To Stand On Back Legs All Day, Cries In The Heat Every Day. leaving him strangled and choking 24/7. The dog and his owners live in the neighborhood of Emiliano Zapata in Teloloapan, Mexico.https://ilovemydogsomuch.tv/chain-back-legs/?fbclid=IwAR32029vfaFZd1mgYzVzi0lDBAqiY_MHfR87y8aj4kCX0CtQkNGNLhFgi3U …

It’s precisely these images that have caused such a stir online, with people aiming to spread them in the hope that the local police are forced to intervene.

After all, the situation isn’t simply a question of comfort for the dog, but rather one of survival. In such heat he could easily die of exhaustion, while the chain about his neck looks short enough to choke him if he stands in the wrong position.

We, along with a great deal of people who have seen the images, are praying that someone intervenes and saves this dog’s life. As it stands, his future looks bleak indeed.

Please help us spread this story in the hope that sufficient pressure is put on the shoulders of those in a position to help.