Often times those who find themselves living with a serious illness are unable to work. It’s not that they don’t want to work, they physically can’t.

And when they can’t work, they are unable to provide for themselves and their families.

In February, Larry Yockey, a fourth generation farmer, was diagnosed with stage 4 melanoma. Initially he was still able to work on his 1,200-acre farm in Ritzville, Washington, but as time went on it became more difficult and eventually, impossible.

That’s when his neighbors stepped in.

Since his diagnosis, the cancer has spread, which left him unsure if he’d be able continue to work like he had in the past.

“The cancer has spread to my bones, so I have a broken hip and ribs,” Larry said to WCNC.

His neighbors, who were aware of his situation, asked if he’d be able to work during harvest season. Larry had to concede. 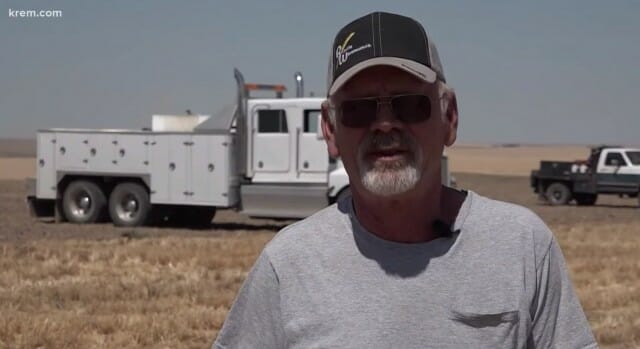 When his fellow farmers learned one of their own needed help, dozens stepped up, even though they had their own work to complete. According to WCNC, the group of farmers spent three months gathering all the necessary supplies to harvest Larry’s 1,200-acre farm.

“They stepped in unbeknownst to me and said don’t worry about the harvest, we’ll handle it for you,” Larry said.

On July 28, roughly 60 farmers brought their machinery to Larry’s farm to complete three weeks worth of work in just six hours.

Larry couldn’t put into words how grateful he was for his neighbor’s help.

“It’s not describable the gratitude I have for what’s going on,” he said.

“I’m just glad to be here and help where I can and where I’m needed,” said Mike Doyle, one of the farmers who helped, according to CBS News.

These are the kinds of stories I like to hear! Neighbors helping neighbors.

It warms my heart and inspires me to go out and do random acts of kindness.